Before day 3, Saturday, there was a couple of nights of work.  Mark straightened out the hood and rear valence (quite a bit of work was needed as that valence was rough and then some!), some sanding and then they were primed.  Door jams were sprayed a semi gloss black.

Sunday was the final body prep was done and, yeah, more sanding.  By 2pm the color went on. WooHoo!  Mark sprayed while I was kept busy mixing paint, feeding hose and releasing the water trap.  After leaving it a couple of hours we checked on it and the paint was drying out a bit uneven with glossy patches and flat patches.  A quick call to “Pops” confirmed that is his car was the same after initial painting (same brand flat paint), but it all evened out when it dried.  I am using hotrod flatz “vintage burgundy pearl”.  So we’ll give it a day and see how it looks.

The body came out really nice and straight.  Having it one color really makes the lines flow and the body mods blend on in.  I think people are going to be surprised when they see it again.  Thanks again to Mark and Rudy – all day every day, and Gary & Grumpy for stopping by and pitching in.

I went over to Marks tonight and after watching him try to pirouette his pickup on the ice in his driveway (For a few seconds I thought he was going to be driving a Chev-ota!) we went in to check on the new paint job .  A day of drying has seen the paint look pretty good except for the roof which has some glossy lines in it.  The verdict – some equipment changes, a light scuff and then reshoot the color later this week.

Pics below – the primer after blocking back with Grumpy (cant show his face – as he says “you want to see my photo check the wall at the post office” 🙂 ) checking it over, Mark pointing at the final “nirgle” before dealing to it, Rudy and Mark remasking and the start of the first coat of color.  Stay tuned for the final “full color” installment later this week… 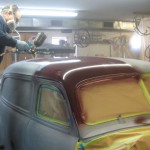 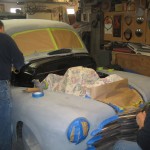 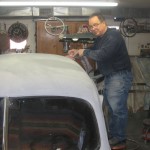 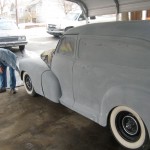 This entry was posted in Gallery, Mis-Information. Bookmark the permalink.